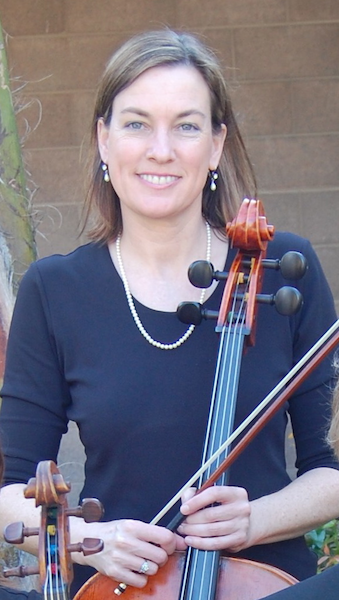 Cynthia (Cindy) Swenson played cello in CYS from 1972-79 during the final Aaron Sten decade, serving as co-principal during her final two years.  Her family was also very involved in the orchestra including cousin Jeff Berglund (french horn 1967-71), sister Dana Swenson (violin 1972-80), and daughter Arika Britt d'Arezzo (oboe+english horn 2008-2014).  Cynthia studied with Irving Klein and Irene Sharp during her CYS years, and then went on to Stanford University earning a degree in Human Biology while studying under music scholarship with Bonnie Hampton and Gabor Rejto, and playing as principal with the Stanford Symphony Orchestra.  Ms. Swenson then undertook careers in laboratory science and interior design before returning to the music field in 2003 as a currently active professional freelance classical and popular cellist in the Bay Area. Cynthia has been a long time principal of the California Pops Orchestra, and also served as principal of the Master Sinfonia Chamber Orchestra and Silicon Valley Symphony.  She co-founded the Altair Trio in 2009, served as music coach with the Palo Alto Chamber Orchestra for four years, and has participated in numerous summer music festivals.  Frequent professional freelancing in various choral, music theatre and rock groups keeps her life interesting too!  Cynthia enjoyed chaperoning CYS recently on its exciting 2014 central European tour.