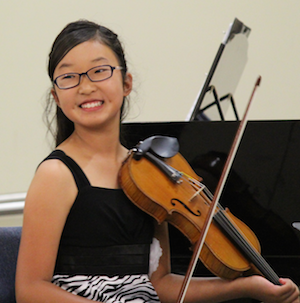 Christine Jiwoo Lee is currently a seventh grader at Redwood Middle School in Saratoga. She began studying violin at the age of 5 under Jung-son Im and has been studying with Eugenia Wie since 2011. This is her first year in CYS, and she is also a member of Redwood Chamber Orchestra.

Christine has won several awards in various competitions, including grand prize in the 2012 Korea Times Youth Music Competition for the violin and viola division at the age of 10. In 2014, she won first place in the US Open Music Competition (USOMC) and was chosen as an Outstanding Gold Medalist at the Winner’s Concert. Christine was also the First Place winner at the CMTANC (Chinese Music Teacher’s Association of Northern California) International Youth Music Competition in 2014. This year, she has been accepted as First Violin into the 2015 California All-State Junior High School Orchestra.

In addition to her violin studies, Christine actively participates in school musicals every year. She was awarded the role of ‘Wendy’ in ‘Disney’s Peter Pan Jr.’ this year, and was showcased as ‘Mulan’ in ‘Mulan Jr.’ in 2012.