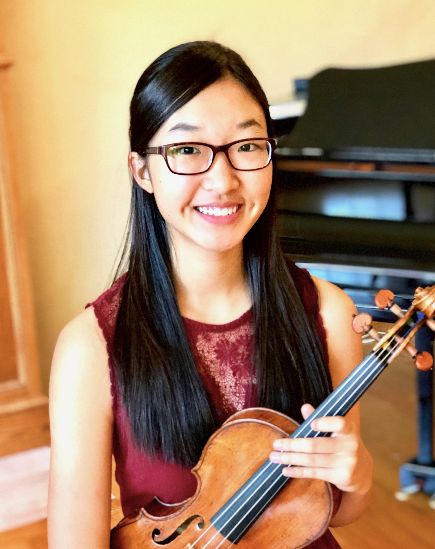 Christine Lee, age 17, is currently a senior at Saratoga High School. She began playing violin at the age of 5, and is currently studying under Zhao Wei at the San Francisco Conservatory of Music, Pre-College Division. Her previous teachers include Wei He and Eugenia Wie.

Christine was selected as a prizewinner of the 2019 National YoungArts Foundation and attended YoungArts Los Angeles in March of 2019, where she worked with professional musicians and other winners for a week. She was also chosen as a violinist in Carnegie Hall’s 2019 National Youth Orchestra of the United States of America (NYO-USA), where she performed with 119 other members selected across the nation and three European countries. This year, she was accepted as a member of NYO-USA 2020.

In the summers of 2015, 2016 and 2018, she attended the Young Performer's program at Music@Menlo. She also attended the Meadowmount School of Music during the summer of 2017 under the tutelage of Professor Gerardo Ribeiro of the Bienen School of Music, Northwestern University. She has also performed in master classes led by Joseph Lin, Chen Xi, Wu Han, Laurence Lesser, and the Calidore String Quartet.

Christine also participates in volunteer activities through music such as HOP3BOX Benefit Orchestra, a group dedicated to helping underprivileged children; AMASE, where she teaches music to special needs students every week; and MESH, a volunteer group at her school where she helps teach violin to elementary school students. Aside from violin, Christine enjoys coding and consuming excessive amounts of boba.