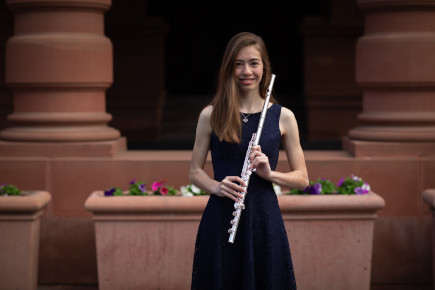 Diana McGrory lives in Menlo Park and is a freshman at Woodside High School.  She began playing the flute at age six and has studied with Jill Heinke Moen for five years.

Diana has won awards in competitions such as the Music Teachers’ Association of California (MTAC) VOCE solo and chamber divisions, at both regional and state levels.  She has also achieved the highest ratings at the California Music Educators’ Association (CMEA) State Solo and Ensemble festivals.  Diana has performed in master classes led by Mary Karen Clardy, Jill Felber, and Amy Porter, and has worked privately with Susan Milan and Patricia Surman.  Diana recently collaborated with composer Vince Oliver on an original piece featuring flute with symphonic band accompaniment.

In addition to flute, Diana plays the piccolo, saxophone, and piano.  She is the lead alto sax in the Woodside High Jazz Ensemble and has also played with several other jazz bands and combos.   Diana shares her love of music by teaching young musicians and by performing at community venues such as senior homes, churches, and the Veterans Affairs campus.  Diana’s other interests include dance, gymnastics, and skiing.