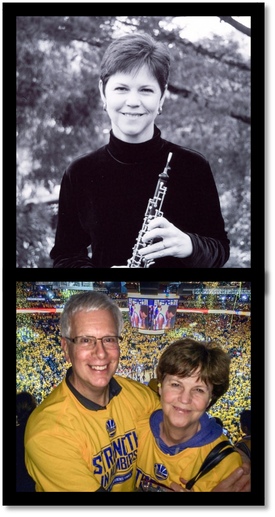 Professional oboist & music teacher Deb Shidler passed away from pancreatic cancer on May 23, 2021, home from the hospital and in the loving arms of her husband of 40 years, Dave Burkhart. She was 66.

Born in Fort Wayne, IN, Deb switched from clarinet to oboe when she found out that her favorite actor, David McCallum, was an oboist. She graduated from Westside H.S. in Omaha in 1972, received her B.M.E. from Univ. of Nebraska, Lincoln in 1976, and her M.M. from Yale School of Music in 1978, where she met her future husband. Deb studied with Ronald Roseman, Marc Lifschey, Sarah Bloom & Robert O’Boyle, and in master classes with John Mack, Joseph Robinson & Marcel Moyse.

While still in college, Deb performed with the Omaha & Lincoln Symphonies and at the Aspen Music Festival. After receiving her M.M., she moved to Israel, where she was a member of the Beersheba Chamber Orch., before joining the Jerusalem Symphony Orch. in 1979. After a season playing together in the JSO, she and Dave returned to the US. They married in Wilton, CT in 1981 and moved to Northern California.

Deb was a top Bay Area freelancer, often performing with the SF Ballet, Opera & Symphony. She could be a chameleon-like 2nd player one day, a plaintive English hornist the next, and an enthralling 1st player the next. And she had an uncanny ability to sight-read a rehearsal, performance, or recording at a moment’s notice—as if the music had been written expressly for her.

From 1991-2014, Deb commuted to Orange County, where she was 2nd oboe of the Pacific Symphony. She became principal oboe of the Berkeley Symphony in 1991, principal of Walnut Creek’s Festival Opera in 1995, and 2nd oboe of Symphony Silicon Valley in 2002. And, from 2011-2019, she was a full-time acting member of the SF Opera Orchestra. One of her most memorable performances was moving up to 1st oboe for opening night of Lohengrin—on only a few hours’ notice.

Deb was as gifted and devoted a teacher as she was a player, inspiring her students with her singing sound and soaring phrasing, musical and historical insight, reed-making skill, and “You’re doin’ it!” encouragement. Her college teaching positions included UC Davis from 1991-2001 and 20+ years at California State University, Sacramento. Deb relished coaching chamber music as much as she did playing it. She taught/coached at CalCap Chamber Music Workshop, Bocal Majority Double Reed Camp, and, most recently, online for California Youth Symphony. She taught her last Zoom lesson the day before she went into the ICU.

In her spare time, Deb always had projects—like building brick patios and a raised garden bed, woodworking, cooking, and genealogy—and she loved long walks in nature and in art museums. She lived very much in the moment and always for others, with a bottomless reservoir of inner strength and determination. And her zest for life, keen wit, and joyful laughter were as uplifting as they were contagious.

Deb will be deeply missed by her loving husband, parents Ken & Pat, sisters Nancy & Jenn, brother Doug, 7 awesome nieces & nephews, and her extended family, countless friends, colleagues, and students. A celebration of her incredible life will be planned for a later date.

After clicking on these links, please be sure and type “in memory of Deborah Shidler” in the appropriate area.

Many thanks for your support and love.