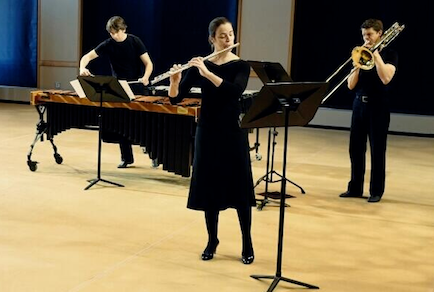 Piccolo player Staff Sergeant Courtney Morton joined “The President’s Own” United States Marine Band in July 2013. Staff Sergeant Morton began her musical training at age 10 and graduated from Abraham Lincoln High School in 2000. She attended San Francisco State University (SFSU) and transferred to the University of Cincinnati-College Conservatory of Music (CCM) where she earned a bachelor’s degree in flute performance in 2004. In 2006, she earned a master’s degree in flute performance and literature from Northwestern University in Evanston, Ill. She studied with Linda Lukas of SFSU, Bradley Garner of CCM, and Walfrid Kujala of Northwestern and formerly of the Chicago Symphony Orchestra.

Prior to joining “The President’s Own,” SSgt Morton served with the U.S. Naval Academy Band in Annapolis, Md., from 2010-13 and performed with the Annapolis Symphony; the New World Symphony in Miami Beach, Fla.; the Quad City Symphony in Davenport, Iowa; the Mid-Atlantic Symphony Orchestra in Ocean City, Md.; and the Civic Orchestra of Chicago. She also was an adjunct flute professor at North Park University in Chicago.