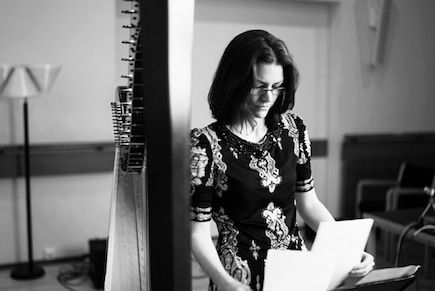 Katie received her Bachelor of Music degree (2002) and Master of Music degree (2004) as well as a Performer's Certificate at Eastman School of Music with professor Kathleen Bride. While at Eastman she garnered numerous awards including the Eastman Concerto Competition (2000), the Rochester Philharmonic “Catch A Rising Star” Concerto competition (2001), and the Dave Barlow Prize for excellence in harp performance. She also appeared as a guest solo artist with the Ying Quartet at the Sanibel Island Music Festival (2004). During her time at Eastman, Katie performed with new music ensembles Musica Nova, Ossia, and Alarm Will Sound. Katie was also Kathleen Bride’s teaching assistant from 2002-2004.

From 2004 until 2008, Katie was the faculty harp teacher and principal harpist at the Brevard Music Festival in Brevard, North Carolina.  Katie attended Yale School of Music in the Artist Diploma program from 2004-2005.

In 2007 Katie began Duo Harpverk with percussionist Frank Aarnink. The Duo performs new music for percussion and harp. To date, Duo Harpverk has commissioned and performed more than 80 pieces from composers around the world. They are featured on the recording Processions (Bedroom Community label) which showcases the music of composer Daníel Bjarnason and released their first CD, The Greenhouse Sessions, in 2012. They have performed extensively throughout Iceland and have toured Denmark, The Netherlands, the Faroe Islands, and the United States. In 2013 they performed at the Kennedy Center as a part of their Nordic Cool festival. Duo Harpverk will premiere the concerto “Poltroons in Paradise” by Stewart Copeland with the Icelandic Symphony Orchestra in June of 2015. Katie has also played on pop and rock albums and on the soundtracks for the Icelandic movies Draumalandið and Bjarnfredarson.

Katie’s principal teachers were Susan Bennett-Brady (Atlanta, GA), Ann Adams (San Francisco, California) and Kathleen Bride (Rochester, NY.) She lives in Reykjavik, Iceland and is married to composer Jesper Pedersen and they have one son, Anders.