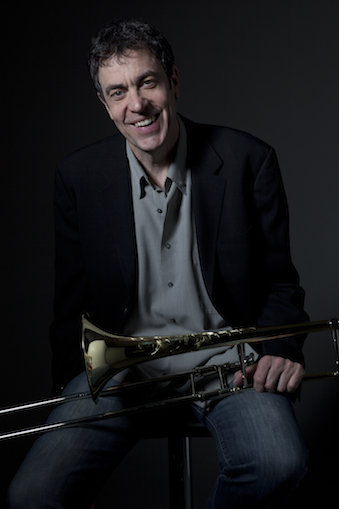 Trombonist/composer Michael Davis has enjoyed a diverse and acclaimed career over the past three decades. Widely known as the trombonist for the Rolling Stones since 1994, he toured and recorded with Frank Sinatra from 1988 to 1994, released 9 solo CDs, composed over 150 works, authored 10 books and appeared on over 500 CDs and motion picture soundtracks. He is the founder, creator and president of Hip-Bone Music, Inc. In 2011, the S.E. Shires Company released the Michael Davis trombone.

Born to a musical family in San Francisco, CA on August 13th, 1961, Michael’s early musical studies included the piano, drums, tuba, baritone horn and electric bass. Settling on the trombone in high school, he quickly found his stride and received principal chairs in many all-state honor groups. His collegiate career commenced at the prestigious Eastman School of Music in the fall of 1979.

In the spring of 1983, Davis received the break he had hoped for when the Buddy Rich Band called and asked him to sign on. His two-year stint with the band forged musical and personal friendships that continue to this day and presented him with “the best graduate degree anyone could possibly hope for.” Michael’s freelance career in New York City began in earnest in 1986 and before long he was one of the top trombonists around. As testimony to his versatility and wide regard, the list of jazz and pop luminaries he has worked with includes: Michael Jackson, Bob Dylan, Aerosmith, Tony Bennett, Jay Z, Sarah Vaughan, Sting, Beck, Branford Marsalis, Peter Gabriel, Sheryl Crow, Lyle Lovett, Bob Mintzer, Paul Simon, David Sanborn, Terence Blanchard and scores of others.

In the field of music education, Davis has served as a clinician around the world, while also authoring a number of highly esteemed instructional books and arrangements for musicians of all ages and abilities. A multiple recipient of awards from the National Endowment for the Arts, he maintains his own jazz groups and projects through Hip-Bone Music. He has documented his efforts on nine solo CDs, including Absolute Trombone II, a dynamic release featuring the finest sackbut ability from New York, Los Angeles and London; Trumpets Eleven, a showcase for eleven virtuosic trumpet masters; Brass Nation, a gathering together of fifty-five of the world’s greatest brass players; Bonetown, a pairing of Davis with LA bass trombone maestro Bill Reichenbach and the original Absolute Trombone, another musical enclave featuring eighteen of New York’s finest trombonists.

Acknowledged by popular musicians, fellow educators and audiences around the world as an immensely talented musical artist who is committed to setting the highest standards for both jazz and his instrument, it is no wonder that legendary Rolling Stones drummer Charlie Watts was moved to comment, “In this ‘bone dry era, it is essential to have Michael Davis around.”