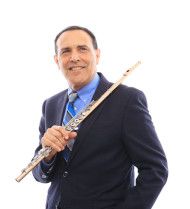 Tod Brody has had an active career as a flutist in Northern California for many years. He serves as principal flutist of the San Francisco Chamber Orchestra, the Sacramento Opera, and the California Musical Theater, and makes frequent appearances with the San Francisco Opera and San Francisco Ballet orchestras, and in other chamber and orchestral settings throughout the Bay Area. Also a contemporary music specialist, Tod is principal flutist for the San Francisco Contemporary Music Players, Eco Ensemble, Earplay, and the Empyrean Ensemble. He has performed dozens of world premieres, and has been extensively recorded. Tod was the flute instructor at UC Davis from 1992 until 2015, and still enjoys teaching and coaching privately.