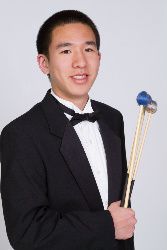 Adrian Lin began playing percussion at the age of 8.  Most recently, he has been selected as one of five percussionists in the country to join the 2014 National Youth Orchestra of the USA.  In the past, he has also been a part of the Juilliard Summer Percussion Seminar and the CA All-State Honor Band Wind Symphony.  Having been a member of the U Music Percussion Ensemble since the fifth grade, Adrian is now a drumset instructor at its music school.  In the summer of 2012, he went with U Music on a two week tour of China where they performed in three cities including in Beijing's prestigious Forbidden City Concert Hall.  At the 2013 CA Percussive Arts Society Competition, he placed top three in the marimba, snare, and timpani categories.  Adrian's teachers have included Leonid Sokolovsky, Galen Lemmon, Nancy Jensen on piano, and Tommy Kesecker on jazz vibes.  Together, they have shaped him into a versatile musician of different genres.  Adrian enjoys playing drumset regularly in his church band and sharing his music with the community.  In his spare time, he is a passionate baseball fan and an ice cream lover.  Adrian is currently a homechooled high school senior.