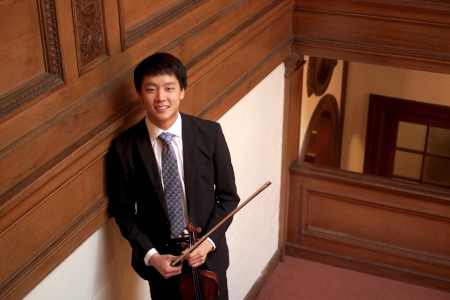 Seventeen-year-old violinist Andrew Lee began his studies at age eight with Li Lin and currently studies with Zhao Wei at the San Francisco Conservatory of Music Pre-College Division. Most recently, he was named a 2017 National YoungArts Foundation Honorable Mention Winner. His other notable accomplishments include winning first prize at the Pacific Musical Society Competition and the CMTANC US International Music Competition. Andrew has appeared in solo performances with the California Youth Symphony, the Prometheus Symphony, and the KAMSA Youth Symphony Orchestra, and he has played for acclaimed artists and ensembles including Alexander Barantschik, Wu Han, David Finckel, Jorja Fleezanis, Ning Feng, the Escher String Quartet, the Orion String Quartet, and the Borromeo String Quartet.

Andrew is also a passionate orchestral and chamber musician. This year marks his fifth season as a member of the San Francisco Symphony Youth Orchestra, where he is currently the Concertmaster. In addition, as part-time Associate Concertmaster of the National Youth Orchestra this past summer, he performed in Carnegie Hall and toured Europe with guest artists including Emanuel Ax and Valery Gergiev. Andrew has twice attended the Music@Menlo Chamber Music Institute, and he has competed at the Fischoff National Chamber Music Competition as the first violinist of the Cambiata String Quartet. He is also a member of the Young Chamber Musicians program, winning first prize at the Galante Prize Competition as the violinist of the Sophos Trio.

Andrew is a senior at Los Altos High School. As a member of the “Back to BACH” Project, he gives performances at local elementary schools in order to help inspire a love of classical music within young children. In addition to playing the violin, he holds a third-degree black belt in Taekwondo and has competed at nationals. He also excels at math, having qualified for the USA Junior Mathematical Olympiad. In his spare time, he enjoys watching movies, going outdoors, and playing basketball with his friends.