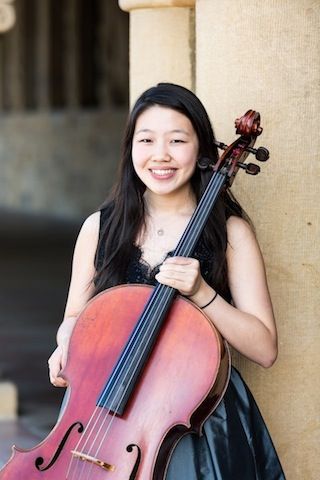 Catherine Kim made her debut with the Palo Alto Chamber Orchestra at age 10, only three years after beginning her cello studies. She has since performed with the Peninsula Symphony as the Grand Prize winner of the 2014 Young Musicians' competition.

"Catherine's playing is both emotionally mature and communicative. I consider her to be among the most gifted cellists of her generation"

As an avid chamber musician, Catherine is also a founding member of the award-winning cello quartet, Konpeito. Konpeito appeared on NPR's Emmy Award winning program “From the Top” in 2014, and their YouTube recording of Hisaishi’s Path of the Wind (from Miyazaki’s Totoro) has accrued over 12,000 views.

Catherine is a senior at Henry M. Gunn High School and studies with Jonathan Koh at the San Francisco Conservatory of Music Pre-College Division. She has attended the world-renowned Verbier Festival Music Camp in Switzerland, Tanglewood String Quartet Workshop, Foulger International Music Festival, and Music@Menlo International Chamber Music Festival. During these programs, she has participated in master classes with Peter Zazofsky, Marc Johnson, David Finckel, Daniel Harding, the Ebene Quartet, and Gautier Capuçon. In her free time, she likes social media and has a following of 50,000 Facebook fans. She also enjoys running and holds the fastest 800-meter time on the Hal Daner Track.