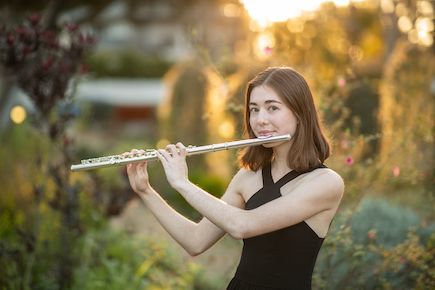 Diana McGrory lives in Menlo Park and is a senior at Woodside High School. She began playing flute at age 6 and has studied privately for 12 years, including the past 8 years with Jill Heinke, a professional flutist and alumna of the San Francisco Conservatory of Music and Royal College of Music. Diana has performed in masterclasses with Jill Felber, Christina Jennings, Amy Porter, and Alexa Still, and worked privately with Susan Milan and Patricia Surman. Diana has also won awards in local and state competitions as a soloist and with chamber groups. Additionally, Diana has collaborated on various arrangements and compositions, including an original commissioned piece for flute and symphonic band by composer Vince Oliver.

Diana has played both flute and piccolo, and been a featured soloist, in symphonies for a total of 8 years. She is in her third year as Principal Flute, and previously played Piccolo, in the California Youth Symphony (CYS) Senior Orchestra under Music Director Leo Eylar. She previously was Principal Flute and Piccolo in the CYS Associate Orchestra and Wind Symphony, and played in multiple groups in the El Camino (now Golden State) Youth Symphony. Diana has been featured in numerous symphonic pieces with CYS and performed the Gordeli Concerto with the CYS Senior Orchestra. Diana has also been active in other CYS leadership roles, including being appointed President of the Senior Orchestra’s Musicians Council.

In addition to playing flute, Diana has played alto saxophone for 6 years. She has played lead alto saxophone in her middle school and high school jazz bands and combos, and has won solo awards in several regional jazz festivals. Diana also plays clarinet and piano, and has participated in diverse vocal projects.

Diana also loves to teach music and has been teaching flute for 6 years. She taught the flute class at her middle school for 4 years (beginning at age 11), and currently maintains an active studio of 15 flute and saxophone students. Diana also co-founded the Menlo Music Mentors program, in which middle school students receive instruction and mentoring from high school students. As the program’s co-director, Diana taught group sessions for over 50 students and mentored the other instructors in the program.

Diana also shares her love of music through a wide variety of community performances. She performs regularly at her church as a soloist and with an ensemble, and at other events such as senior home recitals, non-profit fundraisers, and educational programs. Diana particularly enjoys performing at the annual Veterans Day ceremony at the Menlo Park Veterans Affairs campus, where she and her father have been the primary musicians for several years.

Diana is an active member of her school community and has a strong academic record. She ranks at the top of her high school class while pursuing a rigorous curriculum of Advanced Placement (AP) and Honors classes. She is also active in other performing arts, including being a member and officer of the dance team and a cast member in musical theater productions.

Diana plans to study bioengineering and music at the University of California, Los Angeles (UCLA) this fall.