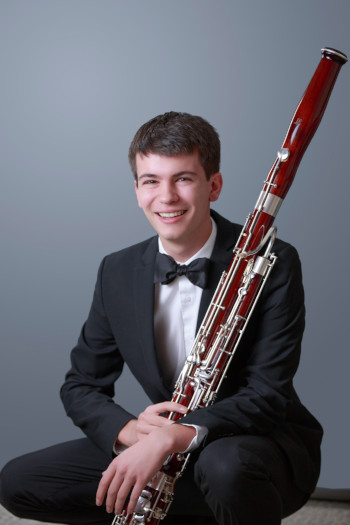 Gregor Dairaghi, 17, started playing bassoon at the age of 12 with Yueh Chou, with whom he has since studied. This is his fifth year with the California Youth Symphony and second year as Co-Principal Bassoonist in the Senior Orchestra. He started playing music in third grade with Grace Butler, who taught lessons in piano and recorder. In the past he has attended the San Francisco Conservatory’s Summer Music West chamber music program and played in the California All-State Wind Symphony and the All-State Symphony Orchestra. He has also participated in the Santa Clara County Honor Band for the previous four years. Recently he performed Vivaldi’s concerto for two cellos arranged for two bassoons with the Mid Peninsula Recorder Orchestra, a group he has been a member of since eighth grade.

Gregor is finishing his senior year at Palo Alto High School where he has been an active member of the band. Outside of music, Gregor is a member of his school’s Science Olympiad team and is currently serving as the club’s Co-President. He also enjoys running cross country and track, which he has done since fourth grade. In college he plans to major in Chemistry while continuing his musical studies.