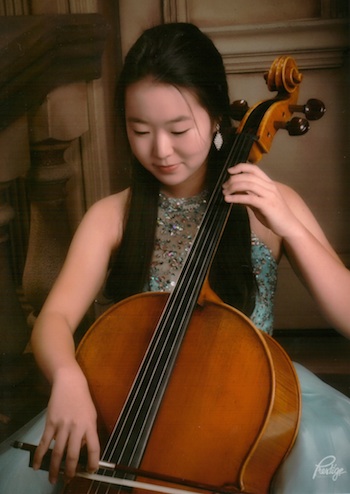 Throughout her summers, Hannah has participated in the California Youth Symphony’s Summer Programs and Tours, performing in New Zealand and Eastern Europe. She studied under Professor Hans Jorgen Jensen of Northwestern University at the Meadowmount School of Music. Hannah was the Principal Cellist in the Chamber Ensemble of the Bay Area Cello Summer Program led by Northwestern University alumni. In the last four years, she has experienced teaching and playing chamber music with the Polyphony Chamber Orchestra. At school, Hannah is the President of The Songwriter’s Guild. As the President and Founder of the Youth for Music Organization, she is always passionate about giving the gift of music to the community. Frequently, she invites young musicians from the age of six to perform with her at hospitals and retirement homes. She encourages her special friends who have autism to join her. This summer, Hannah is looking forward to her last tour with CYS in Western Europe as well as learning from Principal Cellist of the Cleveland Orchestra, Mark Kosower. In the fall, Hannah will begin her studies at her dream school, Stanford University.