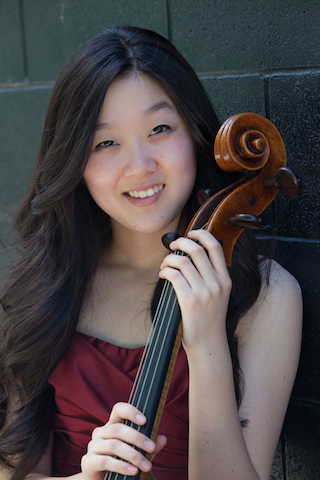 Ila Shon, 16-year-old cellist, has been studying with Sieun Lin since the age of six at the San Francisco Conservatory of Music Preparatory Division. Ila made her solo debut in Carnegie Hall at age 13 and has been a student in the Perlman Music Program’s summer sessions in New York and winter residencies in Florida since 2011, where she receives private cello instruction with Ron Leonard and Paul Katz. Ila also performed in the Music@Menlo International Chamber Music Festival from 2006 to 2010. Ila has been named First Prize Winner of numerous music competitions, including the Pacific Musical Society Centennial Competition, the Korea Times Young Artist Music Competition, the Alexander & Buono International Strings Competition and the American Protégé International Piano and Strings Competition. In addition, Ila has given many concerts and has taken part in master classes with Yo-Yo Ma, Laurence Lesser, David Finckel, Paul Watkins and the Pacifica String Quartet among others. In 2011 Ila performed on NPR's Emmy Award winning program 'From the Top' as cellist of the prize-winning Mondo Trio and in 2012 Ila performed as a soloist at Stanford University’s inaugural TEDx Conference. In 2013, Ila was invited to perform at the Lobby Conference, a premier gathering of thought leaders in digital media. Ila is currently a junior at San Francisco University High School.