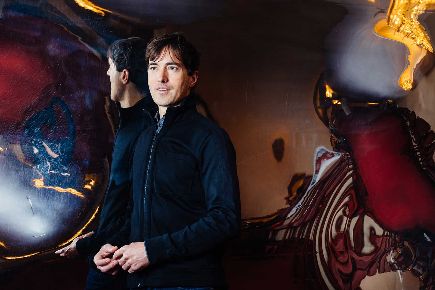 Composer of the Grammy-winning opera The (R)evolution of Steve Jobs, Mason Bates serves as the first composer-in-residence of the Kennedy Center for the Performing Arts. Championed by legendary conductors such as Riccardo Muti, Michael Tilson Thomas, and Leonard Slatkin, his symphonic music is the first to receive widespread acceptance for its unique integration of electronic sounds, and he was named the most-performed composer of his generation in a recent survey of American music.  His opera was hailed as one of the best-selling productions in the history of Santa Fe Opera and was awarded the 2019 Grammy for Best Opera Recording.  In 2018, he was named Composer of the Year by Musical America.

As both a DJ and a curator, he has become a visible advocate for bringing new music to new spaces, whether through institutional partnerships such as his former residency with the Chicago Symphony Orchestra, or through his club/classical project Mercury Soul, which transforms commercial clubs into exciting hybrid musical events. He has also composed for films, including Gus Van Sant’s The Sea of Trees starring Matthew McConaughey and Naomi Watts. He serves on the faculty of the San Francisco Conservatory of Music, which offers instruction in both composition and music technology.