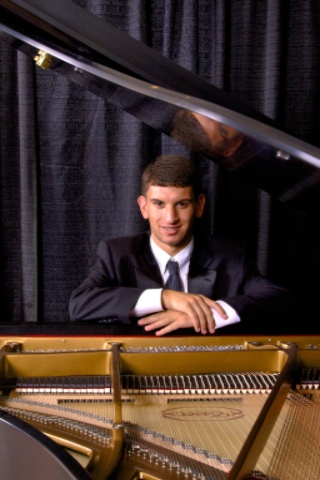 Misha Galant is a senior at California High School in San Ramon. He began piano lessons at the age of six and continued for 12 years with his mother, Olya Katsman. Misha’s musical heritage includes three generations of pianists, including his great-grandmother who was a student of Maria Yudina along with Vladimir Horowitz, and his great-grandfather who studied with Heinrich Neuhaus in Kiev, Ukraine.

In June 2010, at the age of 12, he gave his first full solo recital in Mountain View and has been performing regularly since then. As a member of the Young Artist Guild, he is in great demand as a recitalist around California.

In the summer of 2015, he was a prizewinner in the first Van Cliburn Junior competition in Fort Worth, Texas, garnering the Best Classical Sonata Performance and Audience prizes. He also won Third and Audience prizes at the Eastman Young Artists International Competition and was awarded a full tuition undergraduate scholarship to the Eastman School of Music.

Misha serves as an accompanist for both his former and current high school choirs. He is also a member of the Music Students’ Service League, an outreach program that gives benefit concerts in retirement communities. In the fall, Misha will be attending Columbia University as one of eight students accepted into its joint exchange program with the Juilliard School this year.

Misha is indebted to Sharon Mann and Yoshikazu Nagai of the San Francisco Conservatory of Music for their invaluable and inspirational coaching.