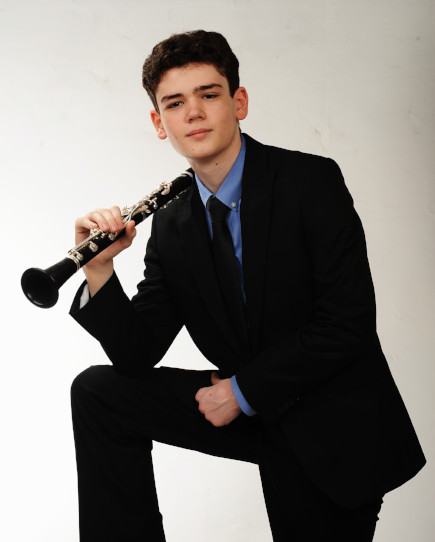 Mr. Ray Wyant, age 16, is a junior at Bellarmine College Preparatory in San Jose, California.  Ray began his study of music at the age of 7 on the piano under the tutelage of Ms. Kirsten Stone of Saratoga, California.  When Ray turned 10 years old, he began his study of the clarinet in the studio of Mr. Fred Rast, a very well know and esteemed clarinet teacher in the San Francisco Bay Area.  During his studies with Mr. Rast, Ray was accepted into the San Jose Youth Symphony Chamber Orchestra. In his first three years of performing on the clarinet, Ray was honored by receiving command performance ratings each school year at the California Music Educator's Association (CMEA) Solo and Ensemble Festivals. In addition, in eighth grade, he was accepted into the top middle school band for the California All-State Music Educators Conference (CASMEC) as its principal clarinetist.

Ray Wyant is honored to be studying with Dr. Janet Averett, San Jose State University, Professor of Clarinet.  Under her guidance, he currently serves as the Principal Clarinetist for the California Youth Symphony Orchestra, under the directorship of Maestro Leo Eylar.   Ray has been a member of the CASMEC All-State High School Wind Symphony during 2016 and 2017 and most recently won the principal clarinet chair for the 2018 CASMEC All State Honor Orchestra.  Ray Wyant was honored in 2016 as the first place recipient of the Mission College Young Artist Solo Competition and was the featured soloist with the Mission College Symphony as well the Winchester Orchestra in February of 2017. In summer of 2017, Ray was selected and performed for six weeks with the Boston University Tanglewood Institute (BUTI) Young Artists Orchestra in Lenox, Massachusetts.  This past December, Ray was selected as the winner of the 2018 Nova Vista Young Artist Solo Competition and will perform as their featured soloist in Spring of 2019.