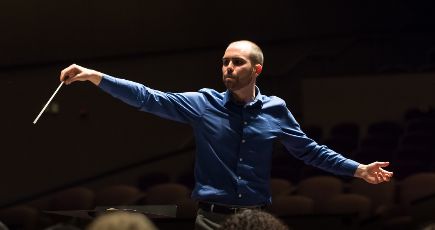 Ryan Murray is the Artistic Director and Conductor of Music in the Mountains, the recently appointed Conductor of Sacramento Youth Symphony's Premier Orchestra beginning in September 2020, the Associate Conductor of the Modesto Symphony Orchestra, and the Music Director of the Modesto Symphony Youth Orchestra. An award-winning opera conductor, Ryan spent his early career working as an assistant conductor and répétiteur, and is currently the Music Director of Opera Modesto  He is the past Music Director of Fresno Grand Opera, and previously worked as a staff conductor for the Bay Area Summer Opera Theater Institute (BASOTI) and The Opera Academy of California in San Francisco. Effortlessly moving between genres, Ryan currently enjoys a wide range of performance genres & platforms, including traditional orchestral and operatic repertoire, pops performances, movies in concert, and a notable emphasis on contemporary American operatic works.

Ryan has recently garnered national recognition for his dynamic, compelling performances of contemporary opera and was the winner of the 2017 American Prize in Opera Conducting for his highly lauded production of A Streetcar Named Desire. He was a 2016 semi-finalist for the Ernst Bacon Memorial Award for the Performance of American Music for his production of Jake Heggie's Dead Man Walking. Ryan is also a past winner of the Vienna Philharmonic’s prestigious Ansbacher Fellowship for Young Conductors, and spent the summer in residence alongside the Vienna Philharmonic at the 2014 Salzburg Festival.

A charismatic pops conductor, Ryan has worked with prominent artists such as Storm Large of Pink Martini, SuperDiamond and the phenomenal symphonic tribute to David Bowie. He has led some of the top vocalists from Broadway and beyond, including Ben Crawford (Broadway's The Phantom of the Opera), Ashley Brown (Broadway's Mary Poppins), and Alli Mauzey (Glinda from Wicked), as well as some of today's top young jazz vocalists including Tony DeSare and James Tormé. With an enthusiasm for film scores, Ryan enjoys the unique challenges of conducting movies in concert; recent and upcoming performances include Disney's Pirates of the Caribbean: The Curse of the Black Pearl and Pixar Animation Studios' Pixar in Concert.

Driven by a lifelong passion for learning, Ryan has attended masterclasses and seminars around the world. Ryan recently attended the Cabrillo Festival of Contemporary Music's Conductors Workshop, and was one of just eight conductors worldwide to be invited to the Musiikin aika Summer Festival Masterclass in Finland led by Musical America's 2017 Conductor of the Year & Principal Guest Conductor of the Los Angeles Philharmonic, Susanna Mälkki. He also recently attended a contemporary music symposium led by Alan Gilbert featuring the New York Philharmonic. Past events include the Aurora Chamber Festival in Sweden, where he studied under Maestro Kurt Masur, the Lucerne Festival Academy’s Conducting Masterclass in Switzerland, and the Eastman School of Music’s Summer Conducting Institute. Ryan holds degrees, summa cum laude, in Bassoon Performance and Voice Performance from California State University, Sacramento and is currently pursuing a Master's Degree in Music Business from the Berklee College of Music. Widely praised for his tireless work ethic, natural poise, and impassioned, inspired performances, Ryan continues to connect deeply with orchestras and audiences alike, and has proven to be a formidable presence on the podium.​