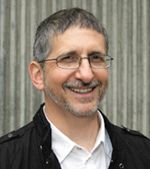 "Hans was not mistaken," he said. "What you hear is the rushing of a torrent."
"A torrent?" I exclaimed.
"There can be no doubt; a subterranean river is flowing around us."
Jules Verne: A Journey to the Center of the Earth

Early in the process of composing this music I heard in it evocations of moving water, sometimes tranquil, sometimes rushing, even torrential. There was also a sense of underground spaces – dank, dark, cavernous, resonant, and echoing. In one passage the music slows to almost complete stillness and it suggested to my imagination a timeless, voluminous space, cathedral-like, with crystals and hanging stalactites above nearly motionless, pooling water. The various sections of the piece have tempo and character indications – tranquil, calm; murky, menacing; turbulent, rushing – that suggest different types of motion associated with the changing speed and flow of an underground river. I determined the title, Subterranean River, and as the piece progressed the music flowed through a changing succession of scenes and spaces, experienced through an imagined voyage.

I started researching subterranean rivers in the natural world and as depicted in mythology and literature. The most famous subterranean river in the collective imagination is the mythological river Styx across which lies Hades, the Greek underworld. There are actually five rivers in the Greek underworld (of which Styx is the most well known) including Phlegethon (the river of fire), and Lethe (the river of forgetfulness). Like the contrasting emotions embodied by these mythical rivers, my piece presents a wide range of feelings and psychological states. But while depictions of the underworld in Greek mythology focus on death, sorrow, and loss, my Subterranean River embodies dynamic energy, presenting the flow of water as a vital force.

The piece opens slowly, with a descending figure that gradually unfolds in the harp and strings. This serves as a backdrop out of which emerges an English horn solo. The solo returns several times throughout the piece, always transformed in some way. Though composed in a single continuous movement there are a number of tempo changes throughout, marking various inner sections, each presenting a different mood and character. In contrast to the opening segment and the very slow and still music described above, there is a boisterous scherzo in the middle. This fast and playful music leads to a huge tutti section that suddenly gives way to a sustained chord against which the opening English horn solo returns. The music gains momentum and energy as it approaches the final section that, in opposition to the slowly descending opening, ascends quickly and forcefully, the metaphorical underground river bursting through to the surface as a powerful spring.

Subterranean River for orchestra was commissioned by the California Youth Symphony and is dedicated to Music Director and Conductor Maestro Leo Eylar.
-- S. B.